People with gardens, particularly those that are big fans of gnomes, are always looking for new ways to make their yard more interesting and also to protect them against intruders. A fun new way to do this is to buy what are called combat gnomes which are fun little lawn ornaments which have weapons and will make people laugh when they see them and will make your home 30% more safe (this is possibly a made-up stat).

While most gnomes that appear in people’s yards are peaceful creatures, these ones are more aggressive in their pursuit of peace by arming themselves to the teeth with weapons such as machine guns and pistols.

These have become more and more popular over recent years as they combine the classic gnome look and feel with a comical yet protective appearance. Something that appeals to a wide range of people.

This statue is based around the character Tony Montana from the 80s classic gangster movie, Scarface (check it out on Amazon here), which stars Al Pacino as the lead actor. At the end of the movie, Tony Montana is in his mansion being actored by men with machine guns and he walks out of his office with huge weapon of his own and utters the immortal line “Say hello to my little friend.”. This garden ornament replicates the way he looks at this point and fans of the movie will identify this immediately.

This combat gnome is on it’s own stand and has the line from the movie carved into it so everyone will know just where it is from. It is made from durable cast poly resin so will resists the more harsh outside weather elements such as wind or rain and has been hand-painted with a yellow coat, red hat and black boots. It stands 9.5 inches tall.

This figure is holding an AK47 in his hands (see the latest price on Amazon here) and is looking through the sight at whatever form of evil it is trying to protect it’s owner’s garden from. Gnome are well-known as being protectors of gardens and this one looks particularly effective in this regard!

He has a blue pointy hat on, brown jacket and green trousers and is made of polyresin so is suitable to be placed both indoors and outdoors.

This figure is holding a hand gun in each of his hands and, whilst this is not officially based around any particular movie, reminds me of Pulp Fiction but this will also remind people of a classic western movie stance.

The paintwork here looks good with the gnome wearing a red hat, blue top and green trousers. This is another statue that is made with the polyresin material so will withstand the outdoor elements.

Want to buy this? You can check out the latest price on Amazon here.

This particular character is not happy at all! He is giving everyone the double bird to show people just how he feels and is a slightly less aggressive than the other figures featured above but is still a form of combat in our opinion.

This is the perfect yard gnome for those of you that want to show how you feel about people visiting your garden without you having to tell them yourself. It will also make those people with a bit of dark sense of humor laugh out loud.

This stands at 8.3 inches tall and is made of stone resin which means that it will be OK to store outside in the wind, rain and more harsh conditions.

Check out the latest price and buy this on Amazon here. 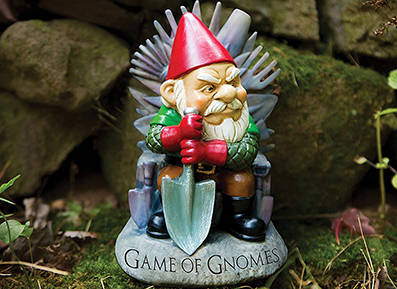 This is possibly the most aggressive of all of these combat ornaments! I say this as this character is sitting on the iron throne from the TV show Game of Thrones and everyone that seems to sit on this chair ends up causing major destruction wherever they go.

The paintwork and detail of the design here looks particularly impressive with the throne looking great and the gnome having a fierce frown that really fits the scene and he is holding a shovel. Clothing-wise, he is wearing a red hat and gloves, green jacket and brown trousers.

This stands at 9.5 inches tall and is weatherproof so can be used both indoors and outdoors without getting damaged.

Find out more and buy this amazing product here.

This particular combat figure has two weapons; one aiming to his side and the other to the sky and is wearing the tradition red pointy hat, blue top, green trousers and black boots.

This statue differs from others by having a solar powered light in the middle which highlights him in the dark and shows up the fierce expression that he has on his face.

This is 7.8 inches tall and is made of polyresin so can be placed indoors or outdoors and will cope OK with the more harsh weather conditions.

This is a play on the famous movie franchise, The Terminator. This figure is standing in the pose made famous by Arnold Schwarzenegger with a gun in his right hand pointing up and he has a red hat and he is wearing a leather jacket, pants and boots with the jacket open to show his muscles.

This stands at 9.5 inches tall and is made of polyresin so will be OK to keep outdoors but this will also look great inside your house. As it is based around a famous science fiction movie franchise, this would make for a great gift for a fan of sci-fi and who are often people that like to collect merchandise around their favorite stories. This is a piece of merchandise that may stand out as not a huge amount of people think to buy a gnome based around their favorite sci-fi and may not even know that this exists!

This guy has a particularly aggressive facial expression on him! Not only that, is sticking his finger up at anyone that dares to cross his path so this is a garden gnome for anyone that has a sense of humor and doesn’t mind people who visit seeing an ornament that is being so blatantly aggressive towards them!

This is another one that stands at 9.5 inches tall so is of average size for this type of figure and is OK to place inside or out in the cold conditions and would make a great gift for the people in your life that love to laugh and show off their strong sense of humor.

Zombies are known to be very combative as part of their nature so we felt that it was appropriate that we included this one as part of this list even though we have a whole page dedicated to zombie garden gnomes!

This statue has a scary and, to me, a slightly comical look to him as he has big eyes and his mouth is wide open. He is wearing the classic red pointy hat and has a light blue jacket with green trousers and brown boots. This is a bit bigger than the other figures in this list, standing at 12 inches tall and is made of resin so can be placed outside in harsh weather conditions.

What Styles Do These Come in?

Whilst many people will buy these as individual items, there are others that will want to arrange them in a tactical style which will give more credibility to them being based around combat and military. As you can see in the image above, when they are positioned in this type of way they look more aggressive and some may also be of the opinion that they are also more comical too.

The image above also shows the different types of them that you can purchase and how they fit well together to give the feeling that they are in battle with their enemy, whoever that may be. For those that are looking for them to protect the valuable items in their yard, such as minerals and gold (which is historically what gnomes were intended to protect) or the more common requirements which is probably more related to things such as tools and plants, this will provide more reassurance.

What Inspired the Ideas for These Types of Gnomes?

As gnomes are known for their ability to protect a garden or yard, especially those that contain valuable things such as minerals, buried treasure or plants, we think that this is an extreme version of a gnome that builds on this philosophy.

Whilst they will certainly not be to everyone’s taste due to the fact that they look quite aggressive and violent, like with many gnomes they are styled in a way that has a wry sense of humor which we think the makers are going for. However, not everyone will want this kind of ornament in their garden or on their lawn.

Are They High Quality?

These particular gnomes are a custom build and the maker has certainly made them to a high standard based on the information that is available online which is a set of photos that document the building process.

They have obviously taken a lot of effort to build them to a very high standard and are so proud of the process that they have posted photos of this online to show it off and to help promote them. This is quite impressive and it would be great if all sellers of our favorite garden ornaments would do this.

Can I Get Them Unpainted?

You can buy these either painted or unpainted which gives you the ability to paint them in your own preferred style if you enjoy doing that. This will be perfect for the artist in your family or group of friends as they let you customise them to an amazing level and creative people will be able to express themselves here.

Can I Get a Flamethrower One?

There is indeed a version of a combat gnome that has a flamethrower. He has the pack on his back as well as goggles to help protect his eyes.

There are lots of combat gnomes on the market that you can buy. These each have their own little quirks and little characteristics that may endear people to them.

Gnome With a Claymore Mine

Claymore is a type of mine and something that has been doing the rounds on the internet in the past is a gnome carrying one of these. I think that this is a custom one that someone made themselves and posted online but people have been using it in relation to discussions about other gnomes.

One example of this is a discussion about a gnome in the videogame Battlefield 5 (it’s on the Arras map) in which there is an Easter egg (a bonus item) in which players can find an evil little gnome that gives them bonus points.

Another is in a discussion relating to the game/online virtual reality, Second Life, in which people have related it to an item in that community called Sodagnome.

Other Gnome Ornaments That You May Enjoy

If, after having read through this article, you think that combat garden gnomes are not for you then you may find that there are other ones which are more suitable to your yard.

If you are looking for other quirky items then you may enjoy reading about those based around the theme of zombies or perhaps funny ones.

Some of you may be looking for something rather more traditional then you may be interested in those ornaments which are based around things such as fishing ones, happy birthday ones, antique gnomes and those which are perfect for Christmas.

If you want to learn about more than just the different types of gnome, we also have interesting information on them such as their long history, whether or not they bring good luck and the meaning of their hat colors.